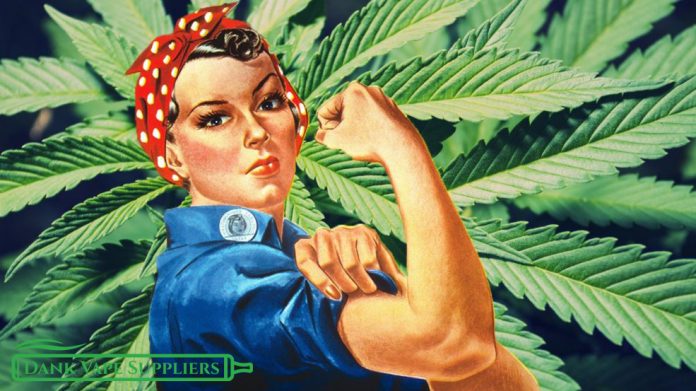 It cannot be denied that there is a stigma around women and cannabis.
That issue is changing, and today more than ever, an increasing number of women are comfortable with using marijuana and are accepting its health and wellness benefits, making their mark in the legal cannabis industry as users.

Historically there has been a gender gap when it comes to supporting the legalization of marijuana. While women generally have a more liberal mindset on many issues, they have been slower to adopt cannabis reform than men, possibly due to religious beliefs.

As an increasing number of women use marijuana, the gender gap in support of marijuana reform is narrowing.
Today 60% of women in the United States support the legalization of marijuana, compared to 44 percent in 2012.

In the past, men dominated cannabis use; today, an estimated one-third of women have used marijuana at least once in their lives.

Women are not only more open to cannabis use, but also increasingly incorporate it into their daily health routine.
According to the New Border Report on cannabis use 2018-2019, more than half of women are already users, and it is estimated that they use it once a week. They usually buy cannabis online.

However, women still hesitate to speak about cannabis use for fear of being judged by other women. Those concerns are expected to improve as the expansion of education and more traditional products further normalize cannabis.

Why do women use cannabis?

One of the main reasons that women are more supportive of marijuana legalization is their growing understanding of the medicinal benefits this marijuana can offer. Cannabis education and its broad therapeutic potential are changing attitudes around the world, including women.

However, women tend to consume cannabis for different reasons than men. Both men and women use marijuana to relax and enjoy social experiences, but women also use cannabis to reduce stress, relieve anxiety, control pain, improve sleep quality, and reduce nausea.

Where Can I Buy Maeng Da Kratom Near Me

Is Lemon Sour Diesel A Good Strain To Buy?